Churches, crisis and the love for the wood craftsmanship. And an unusual sales trip to Norway. That – and many other things – is what Ragnar, Leif and Tore remember from their many years working as door builders at Bovalls Dörrbyggeri. You can read their stories from the 1940s and onwards below.

Ragnar Haglund started working at age 15. The year was 1946.

It was an interest in carpentry and his father’s warning words to his son that he should avoid “heading into the quarry”, i.e. working as a quarryman, that led Ragnar Haglund into almost a lifetime of work at Bovalls Dörrbyggeri. With the exception of two years at technical college in Uddevalla he remained loyal to the company right up until he retired in 1996. But when he joined the company it was called Bengt Gustafssons Snickerifabrik AB, and his first task did not involve joinery.

– The very first job I was given was to smooth out the asphalt, as they had just extended the workshop. Then I had to help out, unload deliveries of wood and stack boards.

Manhandling the wood was heavy work, not just for a 15-year-old like Ragnar. There was no lift truck, so the six or seven employees all helped to load and unload manually. The summer was also unusually hot, so the manual work was sweaty. There was no relief inside the workshop, as this was long before the days of air conditioning, and it was red hot indoors as well. There was no running water in those days.

– We had to go into the neighbor’s garden and fetch water from the pump.

When Ragnar started work at the joinery company it mostly produced windows, made to order from the finest heartwood from northern Sweden. Prior to that the relatively new company had also supplied tie racks and shoe-polishing boxes to Åhlén & Holm, and made beds to meet the growing demand as summer rentals became popular in the small coastal communities on the west coast.

– There was a young lad who stacked them up on the bike to take for glazing and painting at CO Johansson. And when they were painted they had to be taken down to the quay and stacked on the boats for transport out to the cargo boat “Aina”. His nose barely reached over

the top of the frames as he cycled along, so he had to keep his wits about him, says Ragnar with a laugh.

But the joinery factory also made doors, stairs and kitchen fittings. Doing joinery for kitchens was the task that Ragnar enjoyed most.

– It was more varied than standing there making windows. It was also more rewarding when you saw the finished pieces and how they worked. They were built from scratch, and almost everything was intended for the local market. Towards the end of the 1960s prefabricated kitchens came on the scene and it was no longer possible to compete.

Ragnar remembers the joinery workshop as generally being a good place to work, with friendly workmates. The boss, Bengt Gustafsson, was mostly seen as a likable manager, but he had a reputation for being careful with money. It was tough negotiating wages with him.

– His tactic was to tell whoever he was talking to that he had been given a good raise, but not to say anything about it to the others. But he said the same to everyone. And then there were the Christmas presents he gave out each year. In the early years these were a pen and folding rule, which we used for work!

Ragnar smiles broadly, but also points out the good side of his boss. Bengt deserved admiration in several ways, according to Ragnar. He had built up his company without help from his father and brothers, who ran a timber yard, and dedicated every hour of the day to it. He did not waste a minute – he even made use of his toilet breaks to place instruction sheets for pressure-treated doors inside plastic envelopes.

He was also familiar with every stage of the job, and was full of ideas.

– When it came to joinery he was very creative, even though he wasn’t a trained joiner. His construction drawings were fantastic, and he would often come and say: I came up with this last night – this is the way we’ll do it instead!

"The last thing he designed was a large entrance for a hotel in Gothenburg, and I built it in oak."
// Tore Henriksson

Tore Henriksson joined the company in 1960.
He worked with us until the spring of 2010. Tore, who was quickly promoted from painting to joinery, was for many years the only person to work on custom doors. He also uses the word fantastic to describe Bengt, and remembers his drawing ability with respect and warmth.

– It’s difficult to communicate details in three dimensions, but he drew things in such a way that I could immediately understand how to build them. He captured everything that the customer and I needed to see, which was good for both of us.

Bengt Gustafsson kept on designing doors as long as he lived, which was long after the second generation shift at the factory. He was ill towards the end, but he carried on anyway.

– He did not come into work at that time, so I had to go to his house. The last thing he designed was a large entrance for a hotel in Gothenburg, and I built it in oak, recalls Tore.

Working from Bengt’s drawings, Tore also built – among many other things – doors for a number of churches, two of which can be seen on Smögen and in Bovallstrand. But one of the most memorable jobs that Tore worked on was an entrance for an old hotel in Gävle.

– It was probably the most ornate thing I did. It was a double door in quite heavy oak, with deep reliefs, and the whole entrance was almost three metres tall. Tore has only seen a photo of the doors installed at the hotel, but based on that he is very pleased with his efforts. Otherwise he belongs to that breed of self-critical, perfectionist craftsmen who always feel they could have done a little better.

Oak can be a difficult material to work with, he explains, so it was especially rewarding to do a big job in this type of wood and be happy with the end result.

– It’s generally difficult to cut, and it can splinter easily at the edges when you use a router. I prefer teak. Teak is incredibly easy to cut, and it’s easy to correct things if you happen to make a small mistake. That’s probably one of the things that defines a craftsman, the ability to fix things if you make a small mistake. One of the most rewarding parts of the job was also being left to solve problems myself.

Tore believes that one of the reasons he remained loyal to the company until he retired in spring 2010 was that he was given training and was allowed to work on custom orders. He worked at Bovalls Dörrbyggeri for almost 50 years.

Leif Karlsson remembers when Bengt Gustafsson was going on a sales trip.
Leif followed in his brother’s footsteps and began working at the joinery company as a 16-year-old in 1969. He is still here in 2016 and has no plans to retire. Right from his first days as an employee Leif singles out Bengt Gustafsson’s ability to ensure there was always work, even though the company’s advertising budget was probably zero. Bengt focused on building direct contacts with builders and occasionally went off on sales trips. According to Leif you could smell it in the air when it was time for a tour. Literally.

– He always wore a lot of aftershave then. When things were quiet for us Bengt headed off to chase up customers and always came home with an order. They almost threw him out of Norway, but he never gave up. When he drove up there he loaded up the trailer with doors, and at the border he bribed the customs men with whiskey and cigarettes – otherwise they could take hours to process your papers.

As a supplier to a recession-sensitive industry like the building sector there have been many crises over the years, but despite this there were few redundancies at Bovalls Dörrbyggeri and the business has always kept going. Leif recalls a deep recession in the 1970s, when things were looking bad. Serial manufacturing of doors was a large part of production at that time, and they had built up a large stock when demand suddenly plummeted.

– We weren’t selling any, and we were stacking doors everywhere, in the finishing shop and in every spare corner available. Bengt was getting worried that he would not be able to cover our holiday pay. But the problem was resolved just before the holidays, when the economy picked up again.

Leif Karlsson is among those who have not seen any real reason to seek work elsewhere. It’s been easy to enjoy working here, he feels, and there have been few conflicts at work. Everyone helps to create a good atmosphere.

– If you stay for a couple of years, then you are likely to stay for eight to ten years. Or forty to fifty, he says, laughing.

Bengt Gustafsson föddes 1919 och grundade AB Bengt Gustafssons snickerifabrik, som firman hette då, 1943. At the age of 88, our founder Bengt Gustafsson, began writing his memoirs, covering the period from when he set up the company until the 1950s. Read a few extracts from his hand-written notes. 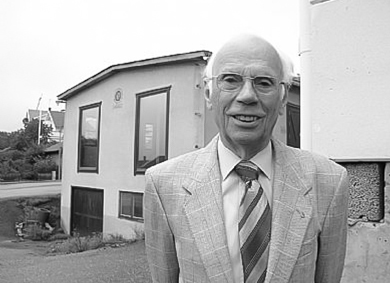 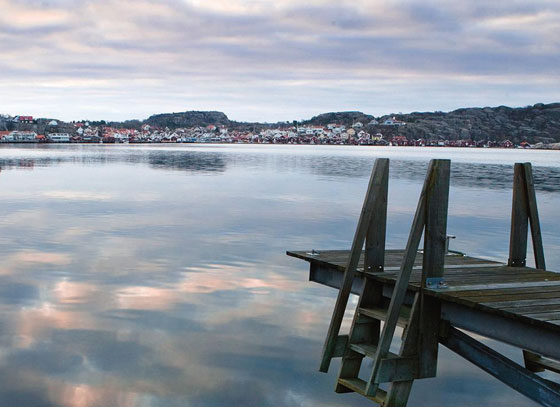 “Sad and gloomy, crags and more crags, bare rock, no trees, no bushes, no greenery”. Bovallstrand has not always been regarded as a sunny holiday paradise, at least not according to this 1855 description of the West Coast community. But the 1800s high-society tourism changed that dramatically.

The west coast of Sweden has a harsh climate that combines salt spray with high winds. The old craftsmen builders knew that doors had to be solidly constructed from good materials to withstand the weather on the west coast. 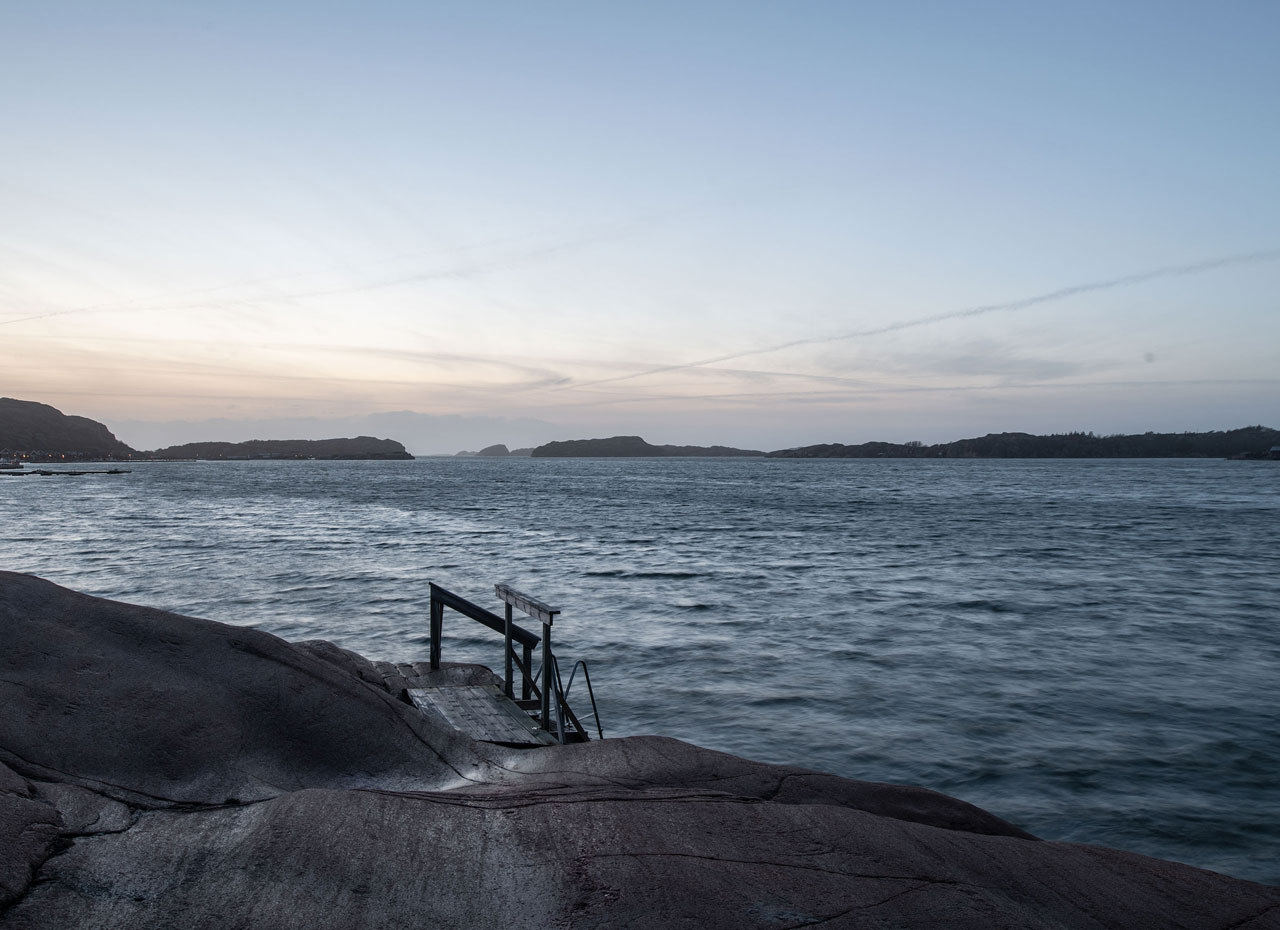 Shopping Cart
Shopping cart
There are no products in the cart!
Continue shopping